During an interview at CHINAPLAS, Gerhard B?hm, Managing Director Sales, Arburg, underscored that digital transformation has been a topic that Arburg focusing on for many years.

As introduced, one of the highlights at the show was the new "arburgXworld" customer portal, which was presented in China for the first time at CHINAPLAS.

B?hm revealed: “A first group of test customers in China will have access to ‘arburgXworld’ as early as this summer, and from K 2019 onwards the new portal will then be available to all customers.”

This digital service marketplace includes four cloud-based applications (apps) that can be used on a PC or mobile device. For instance, in the "Shop", customers can order spare parts directly and easily online 24/7 while the "Machine Center" brings transparency to production and reduces organizational effort.

In addition, some digital solutions were presented at the same time, including the six digital Arburg assistance packages for starting, setting up, optimising, producing, monitoring and servicing Allrounder injection moulding machines, as well as the Arburg ALS host computer system.

Visitors were given a live demonstration of how ALS can be used to capture and archive relevant process data online and had the opportunity to experience the potential of augmented reality (AR) for service purposes. As said, ARBURG is a pioneer in liquid silicone and multi-component injection moulding and looks back on many years of turnkey expertise.

“We brought the LSR processing to China as we found that a lot of Chinese medical companies are working on high-tech LSR parts and the demand is growing here,” he explained.

B?hm introduced that, at the fairground, the production of LSR/LSR wristwatches was demonstrated as an application highlight and as a benchmark for what is currently possible using LSR processing.

Assembly of the wristwatch took place within the injection moulding cycle, by means of a linear MULTILIFT V 15 robotic system. It removed the wrist straps and set them down in a cooling station and then moved them to an assembly station. Consequently, they were fitted with the watch housing and rounded off ready-to-use with a clasp. 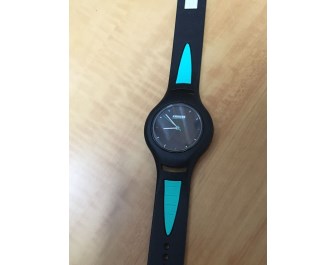 According to him, another magnet for visitors was the electric ALLROUNDER 370 E GOLDEN ELECTRIC with MULTILIFT SELECT robotic system. The machine produced PC breathing masks for babies using a single-cavity mould from MEHOW.

“We use this application to demonstrate that our entry-level electric series is also suitable for the precise production of medical technology parts,” B?hm said.

He further introduced another multi-component application which was exhibited by MEHOW at its booth. The hydraulic two-component ALLROUNDER 470 S was integrated into a customer-specific turnkey system in combination with a six-axis robotic system.

“Visitors may watch the demonstration of the production of water cups from PC and LSR as a hard/soft combination,” he said. During the interview, B?hm introduced the new large freeformer 300-3X which was launched in November last year.

“The key feature of this machine includes the three discharge units which for the first time enabling industrial additive manufacturing of complex functional parts in resilient hard/soft combinations with a support structure. This is unique within the industry!”

“For example, TPU, ABS and support material are processed to create a movable gripper finger.”

He mentioned that the freeformer is particularly popular for medical materials, resilient parts in hard/soft combinations, as well as products made of soft materials.

“For freeformer, we are focusing on some specific markets, such as the medical sector, thanks to its processing of FDA-approved original materials. We already have further applications in the Europe in medical sector and we will further promote the freeformer in China with our close relationship with a trading partner who provides sales support locally.”

He further introduced some components which show how the company’s open system can be used to specifically influence component properties such as density and filling level. For instance, the cube made of TPE has different Shore hardnesses, achieved by varying the spacing between the droplets.

Regarding the strategic plan in China, he disclosed that Arburg will establish and expand automation solutions and production cells in China.

For example, he said, there will be cooperation with local manufacturers of peripheral equipment such as feeding devices, conveyor belts or protective barriers. The complete system will then be assembled and commissioned at ARBURG so that it can be delivered to the customer as a turnkey solution.